> Doug Melvin has already missed out on multiple opportunities to sign relievers this offseason, the most notable guys being Jason Grilli and Sean Burnett. But, for the first time this offseason, Melvin himself named off a few relievers that the Brewers are currently interested in. Those names included Jon Rauch, Jason Frasor, Kyle Farnsworth, and Mike Gonzalez, all of whom were in my relief pitcher article from a few weeks back.

In my opinion, Frasor is by far the most attractive pitcher of those four. He fits the bill of a power arm the Brewers are looking for, and can pitch the eighth inning (I’m not so sure I completely trust Jim Henderson in the eighth yet). Frasor doesn’t have the greatest career numbers, but you have to take into consideration that he’s spent the majority of his career with the Blue Jays in the AL East, so a move to the NL might do him good. 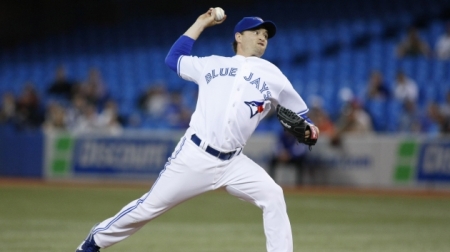 The other three options Melvin listed are decent, I suppose. Farnsworth had a breakout season in 2011 as the Rays’ closer, but had an injury-plagued 2012. Gonzalez is that coveted lefty the Brewers are looking for (though I’d much prefer J.P. Howell, who I’m surprised Melvin didn’t mention), but the competition for him his; same goes for Howell. And I’d stay away from Rauch- he reminds me too much of Kameron Loe.

But if Melvin does decide to go after one of these guys, hopefully he gives him a substantial offer. Not that I want Melvin to overpay for a reliever, but I felt like he didn’t go hard enough for guys like Grilli or Burnett. However, the four guys Melvin mentioned today should come much cheaper than Grilli or Burnett.

> The Brewers signed utility infielder Donnie Murphy to a minor league contract with an invite to Spring Training. Murphy, who’s pretty versatile in the field, isn’t the greatest at the plate, as he hit just .216 in 129 plate appearances for the Marlins last year, and is a career .205 hitter. But, he does provide some depth at shortstop,a position the Brewers struggled with last year until the acquisition of Jean Segura. After Alex Gonzalez went down, we saw the tandem of Cody Ransom and Cesar Izturis flail miserably.

Anyway, Murphy should compete with guys like Mat Gamel and Taylor Green for one of the back-up infielder spots.

> This year’s edition of the Winter Meetings were a disappointment for the Brewers, to say the least. They offered deals to a few of their targets, including Ryan Dempster, Jason Grilli, and Sean Burnett, but all of them were rejected. Burnett ended up signing with the Angels because they offered him much more cash the Brewers. Grilli hasn’t signed yet, but the Brewers haven’t been in contact with him for over a week for some reason, so he’s off the table. Dempster is still out there, but is holding out for a three-year deal. So far, the parties interested in Dempster- the Brewers, Red Sox, and Royals- have offered him two-year deals, but have been hesitant to add on that third year because of his age.

So that’s about the gist of what happened- rather, what didn’t happen- at the Meetings.

> The Brewers did make a move today, however, signing left-hander Travis Webb to a minor league deal with an invitation to Spring Training.

Webb has spent his entire career with the Reds’ minor league affiliates, never making it to the Majors. He has a career ERA of 4.13 in the minors, but went a sub-par 2-6 with a 4.81 ERA in 2012 at Triple-A. Webb was a starter at the beginning of his professional career, but has since converted into a reliever.

> Doug Melvin said that the Brewers aren’t in on Brian Wilson. We can all take a sigh of relief now.

> As expected, the Brewers officially cut ties with their second-longest tenured player, Manny Parra. The Brewers had five arbitration eligibles, the others being John Axford, Marco Estrada, Chris Narveson, and Carlos Gomez, and Parra was the only one to be non-tendered.

Maybe Parra just needs a change of scenery, and that’s probably something he’s going to get. Though a lot of Parra’s career stats are alarming- his 5.12 ERA, 5.4 BB/9, and 1.645 WHIP are the highlights of them- he has a career 8.4 K/9. That, coming from a power lefty who also has a splitter, is going to draw interest from teams regardless of the other stats.

So best of luck to Parra wherever he ends up; it simply didn’t work out in Milwaukee.

> There have been a few mega-deals/large extensions signed over the past few days. Today, David Wright’s seven-year, $122 million deal with the Mets followed Evan Longoria’s six-year, $100 million extension with the Rays. Both of these are similar to the extensions Ryan Braun and Joey Votto signed in recent years.

News from the last few days

> The Mariners have reportedly shown interest in Mat Gamel. I’m going to have an article up tomorrow about how that applies to the Brewers and what they could get in return, but for now I’m going to recap the news I’ve missed over the past few days.

> The Yankees re-signed Hiroki Kuroda to a one-year deal. I was holding out hope that the Brewers would some how be able to sign him, but it was unlikely the whole time.

> The Royals signed Jeremy Guthrie to a three-year deal. He could have been another option for the Brewers, though he was seeking a three-year deal, and I think he’s too dangerous to commit to for that long.

> 10 teams have reportedly shown interest in Kyuji Fujikawa. The Brewers could be one of those teams, seeing as Fujikawa is a hard-throwing reliever.