Seven Brewers to participate in WBC

I’m happy for all of these guys, but the one issue with the Classic is that it interferes with Spring Training. I typically don’t have an issue with that, but, as someone on Twitter pointed out earlier today, both of the Brewers’ big league catchers will be participating in the WBC, so the new Brewers pitchers (particularly the relievers) won’t have much time to get familiar with them. That shouldn’t be an issue, but it is something to think about.

Also, the fact that Gallardo will be throwing extra innings due the WBC will probably try and prompt Ron Roenicke to give him some sort of innings limit, knowing his shenanigans. Hopefully it doesn’t come to that.

> Last night may have been the biggest win of the season for the Brewers up to this point. After a two and a half hour rain delay and a four and a half hour game, they came out on top against the Cardinals in 13 innings, 5-4.

Since Yovani Gallardo was getting the ball, I’m pretty sure all Brewer fans were bracing themselves for the worst. Yo is terrible against the Cards in his career, with a 1-9, 7.05 ERA mark against them going in. And he got off to a bad start, as the Cardinals jumped on him for two in the first inning on an RBI double from Matt Carpenter and a sacrifice fly from Allen Craig. After that, though, Gallardo held serve against the team he’s struggled so much against, going six innings while giving up just those two runs. He struck out six and walked none.

The first Brewers run didn’t come until the fourth inning on Taylor Green’s RBI groundout. Other than that, Kyle Lohse didn’t show many signs of breaking, until the seventh inning. He walked Martin Maldonado and gave up a single to Jeff Bianchi, which prompted Mike Matheny to remove Lohse in favor of Edward Mujica. Mujica gave up what looked like a routine line out from Travis Ishikawa, but right fielder Carlos Beltran misplayed it and let the ball get past him. Ishikawa was given an RBI double.

The Brewers then took the lead in the eighth. Carlos Gomez hit what would have been an infield single anyway, but shortstop Daniel Descalso threw the ball away, allowing Corey Hart to score from second base. After Gomez advanced to second on a stolen base, Maldonado came through with an RBI single to give the Brewers a 4-2 lead.

But this was far from over. Jim Henderson walked the lead-0ff man in the eighth, like he always seems to do. Then, after recording two outs, he gave up a game-tying home run to Yadier Molina.

The next run didn’t come until the 13th inning, when Braun dealt the Cards their finishing blow with a go-ahead solo shot off Lance Lynn. John Axford came on to nail down the save for a game that ended at 2:05 A.M. CT. Yes, you read that correctly. 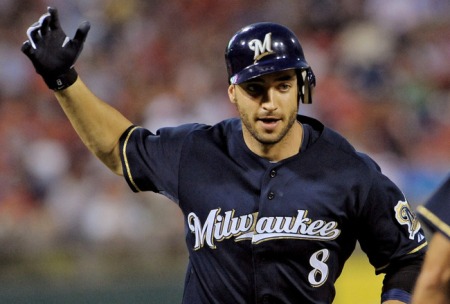 > Green got the start in place of Aramis Ramirez, who’s still out with an oblique strain/bad back.

But here’s Green’s side of the story. He drove from Nashville to his home in Vancouver (God knows why), only to get the call from the Brewers after he got there. Apparently he lives four hours from the airport, so he had to make that drive, then make the four and a half hour flight to St. Louis so he could be in the starting lineup. Tack on the rain delay and 13 inning game, and Green had himself quite a day. 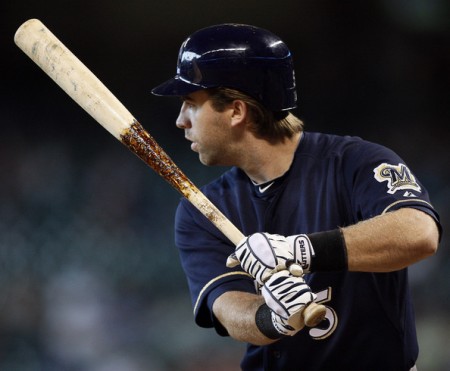 > Ramirez hopes to return to the lineup for tonight’s game.

> MLB.com re-ranked their top 100 prospects and each team’s top 20 following the September call-ups. Here are the Brewers’ top 20:

> Brandon Kintzler got his second big league win after pitching a scoreless 12th. His first win in the Majors also came in an extra inning game.