> Schoolwork- endless schoolwork. That’s basically my excuse for getting articles up the past few days. The past three days have been the worst of the year for me. I’m hoping the next few weeks will be at least a bit lighter, otherwise my time to write on BWI will get mercilessly crunched. Anyhow, I’m not going to write a big article today, but all the news I’ve missed should cover that up.

> So far, the offseason is going as planned- the Brewers are getting rid of the useless players, so to speak, in order to create roster space. The first batch of players to go is Kameron Loe, Nyjer Morgan, Jose Veras, and Travis Ishikawa.

Morgan’s outright to Triple-A (and eventual election of free agency) probably gathered the most national news, especially because of the role he played on the postseason team in 2011. He was responsible for getting the Brewers to the NLCS on that unforgettable walk-off hit against the Diamondbacks in the NLDS, and he ingrained himself into the minds of Brewers fans (and into the minds of other fans, but in a negative way) with all of his aliases. But it just wasn’t Nyjer’s season in 2012. He hit a measly .239, and lost practically all of his playing time so that Carlos Gomez could prepare for a possible starting role in 2013. The emergence of Norichika Aoki didn’t help his cause either. And, with the left-handed Logan Schafer proving that he could possibly play the role of the fourth outfielder in 2013, there just wasn’t a spot for Morgan. So I thank Morgan for all of his contributions in 2011, but his antics and things weren’t fitting this year.

Loe and Veras also elected free agency following outright assignments. Loe was one of the Brewers’ best relievers in 2010, posting a 2.78 ERA. He had a second-half surge after getting off two a rough start in 2011, but it was the opposite this year. He had an ERA below 4.00 for most of the season, but it faded all the way to 4.61 in September. Statistically, Veras was one of the Brewers’ best relievers this year (though it’s not good when a guy with a 3.90 ERA is your best reliever). But he quietly had innings just about as frustrating as some of Francisco Rodriguez’s innings, so I’m relatively glad that he’s gone.

Lastly, Ishikawa was outrighted to Triple-A today, and is expected to elect free agency after he clears waivers. Ishikawa had his moments with the Brewers, but overall was the poster-boy of an extremely weak Brewers bench.

After their 2012 performances, I don’t think any of these players will be missed. However, Morgan will always be remembered: he’s written his legacy into Milwaukee history. 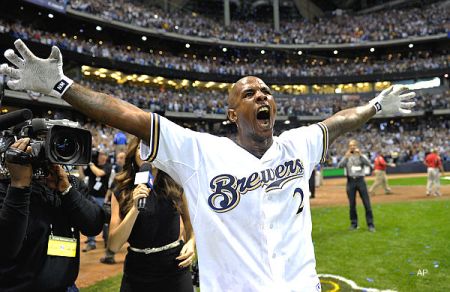 > The Brewers claimed reliever Arcenio Leon off waivers from the Astros.

> K-Rod was charged with domestic abuse for that incident in Wales that popped up two months ago.

Just stay away from Wisconsin, K-Rod.

> Speaking of K-Rod, the Brewers did not give “qualifying offers” to him or Shaun Marcum.

This “qualifying offer” thing is something brought about by the new Collective Bargaining Agreement, and basically replaced the Type A/Type B free agent system, which usually determined whether or not a team would receive draft picks as compensation for losing key free agents. Qualifying offers now play that role, and they are determined by the average salary of the top 125 player salaries from the previous season. That salary this season was $13.3 million.

As if K-Rod or Marcum are going to get $13.3 million on the market anyway. This was a no-doubter for the Brewers.

I didn’t look much at news today because I was busy, but here was the first thing I saw when I finally did- “Brewers decline Betancourt’s option.” My day was instantly made.

That’s right, Yuniesky Betancourt-haters (including myself). He probably won’t be playing shortstop for the Brewers next year, which means better defense at that position and better offense in the lineup- hopefully.

Betancourt had a pretty bad 2011. But it may have been good for his standards, actually. He hit .252 with 13 home runs and 68 RBI. All of those stats are worse than his 2010 season with the Royals, in which he hit .259 with 16 home runs and 78 RBI. Anyway, if you add his 2011 stats to his lazy defense at shortstop, you can see why the Brewers declined his option.

My guess is that Doug Melvin will make a push for Jose Reyes, the Mets’ All-Star shortstop who is now a free agent. His .336 batting average won him the NL batting title (although he technically cheated to get it). Reyes doesn’t hit for much power, but he did lead the NL in triples with 16. His offense, defense, and speed all make him a giant upgrade from Betancourt.

Oh yeah, and the Brewers are also expected to be top contender for lefty starter C.J. Wilson. He went 16-7 with a 2.94 ERA as the ace of the Rangers this year, but he had an ugly postseason, as he went 0-3 with an ERA hovering around 7.00. But, he would make a great addition to the Brewers’ rotation, and would probably push lefty Chris Narveson (11-8, 4.45 ERA) back into the bullpen.

And just a couple more things before I move onto my next topic- the Brewers’ declined reliever Francisco Rodriguez’s $17.5 million option, but that was expected, as there was no way the Brewers would have been able to afford that. Also, Dale Sveum is going to be interviewed as one of the possible managerial candidates for the Red Sox. No idea why they’d want him, unless they’ve already given up on next year.

Anyway, onto the next topic. Here is a list of every free agent from every team, with their respective position next to their name: